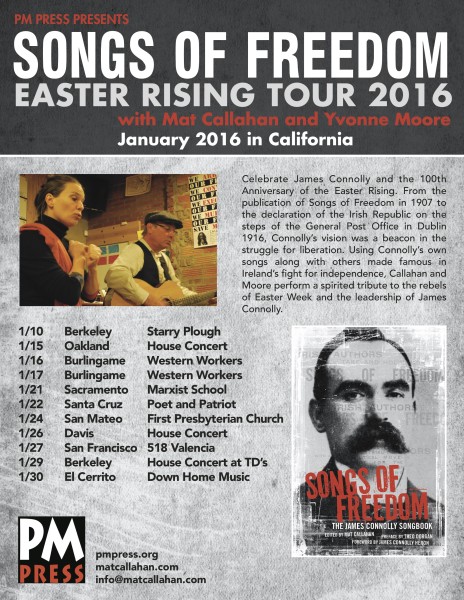 Mat Callahan and Yvonne Moore begin a year of celebration! James Connolly and the 100th anniversary of the Easter Rising. From the publication of Songs of Freedom in 1907 to the declaration of the Irish Republic on the steps of the General Post Office in Dublin 1916, Connolly’s vision was a beacon in the struggle for liberation. Using Connolly’s own songs along with others made famous in Ireland’s fight for independence, Callahan and Moore perform a spirited tribute to the rebels of Easter Week and the leadership of James Connolly. Songs of Freedom Book and CD

January 24th-11am-live on-air on the Across The Great Divide show on KPFA (Berkeley, CA)

January 26th-Evening concert at the Salon in Davis, CA.
email for reservations

January 29th-7:30-Concert at TD’s in Berkeley
email for reservations