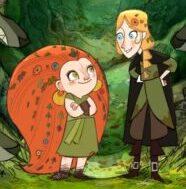 Wolfwalkers is an animated fantasy adventure film directed by Tomm Moore and Ross Stewart. The film is the third and final installment in Moore's "Irish Folklore Trilogy", following his previous films The Secret of Kells (2009) and Song of the Sea (2014). The film is nominated for an Oscar - … Continue reading