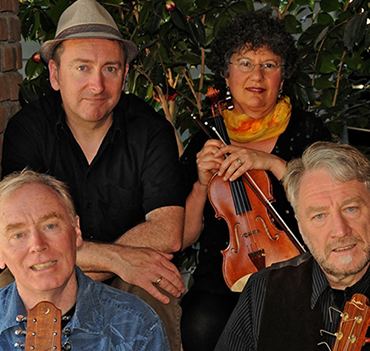 Brothers Michael and Shay Black play an exciting mix of Dublin street songs, music hall songs, and historical ballads, as well as songs from the Irish, English, and Scottish traditions and the occasional contemporary number. Singing in close harmony, playing guitar, banjo, and keyboards, telling funny stories, and even dancing now and again, Michael and Shay draw people in with their energy, wit, and superb musicianship. They have a special fondness for songs that inspire the audience to sing along with the chorus, like “Down Our Street” and “The Great Storm Is Over.”

Shay and Michael grew up in Dublin, moved to England in the early 1970s, and eventually settled in California, Michael in San Francisco and Shay in Berkeley. They’ve recorded one album with their brother Martin as the Black Brothers, and three with Martin and their sisters Frances and Mary as the Black Family. Michael also has a self-titled solo album. The Irish Echo, in its review, praised Michael as “a gifted, accomplished, sensitive ballad singer with discerning taste in songs.” Shay has played and recorded with the illustrious Stan Hugill and the fabled sea shanty group Stormalong John, the Irish band Garva, the California Revels, Shira Kammen, Peter Kasin and Richard Adrianovich, Sharon Knight, and Steve Baughman. Don’t miss Michael, Shay, and friends tonight at the Freight. Their joy in performing, their love of a good story, and their charm and wit make an evening spent in their company one to savor.