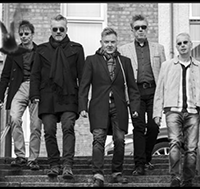 Join The Undertones live in concert at Slims in San Francisco. The Undertones emerged from Derry in 1976 and hit the world stage in 1978 with the release of Teenage Kicks. Feargal Sharkey left the band in the 80s to pursue a solo career and after 16 years of silence, the rest of the band reformed with frontman Paul McLoone. More than 40 years later, they are touring away, and apparently “a scorching live act.”  Watch them June 2nd at 7pm.