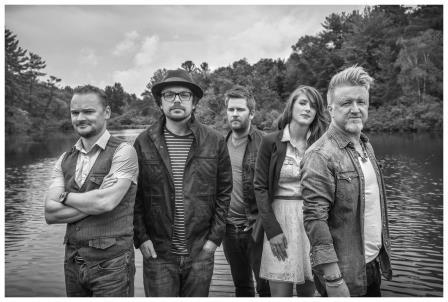 After 10 albums, and nearly 3,000 live shows, Gaelic Storm the chart-topping, multi-national Celtic band is dishing up a hearty serving of Full Irish. The greatest-hits album spans the bulk of the band’s career from 2004-2014, mixing crowd favorites and concert staples with three previously unreleased recordings.Gaelic Storm has straddled the line between tradition and innovation for nearly two decades. Led by founding members Patrick Murphy and Steve Twigger, the group infuses traditional Celtic music with modern influences, updating the genre for a new generation of fans raised on rock, country and folk. Along the way, the musicians have topped the Billboard World Chart four times, appeared in the blockbuster film “Titanic” (where they performed “Irish Party in Third Class,” an unreleased song made available for the first time on Full Irish) and earned a reputation as a hard-touring, genre-bending band.”We have earned every single one of our fans, one at a time,” Murphy says. “There’s no sponsorship. No corporation is pulling strings. Every fan is made by us playing a show and shaking hands and learning names. We’ve become friends with so many of them. When someone at a show tells me they’ve never seen Gaelic Storm before, I say, ‘Welcome to the family.'”Regularly playing more than 120 shows a year, Gaelic Storm has built a loyal following as diverse as the band’s own music. Fans of traditional Irish music have championed the group for years, but so have fans of harder-edged Celtic rock. On tour, Gaelic Storm is just as likely to play a large rock club as a plush theater. The band makes regular appearances on cruises, too, joining artists like the Barenaked Ladies and Michael Franti.”Our audience spans the whole spectrum,” Twigger says. “We’ll play a rock venue one night, then a performing arts center that might’ve hosted a ballet performance the night before. We’ve got hardcore fans who love our energy, Jimmy Buffet fans who love our message, folk fans who love our stories. Everyone can appreciate it, and that’s been the secret to our longevity.””Looking back over our past albums is like flipping through a photo album,” adds percussionist Ryan Lacey, who joined the band in 2003. “Each record was made during a different time and a completely different phase of our lives. What hasn’t changed is the message. We want everybody to have a good time, to enjoy themselves. It’s the sort of message that everyone can get behind.”Although Full Irish takes a look backward, Gaelic Storm is still moving ahead at full speed. There’s another studio album in the works, as well as plenty of tour dates on the books. Hungry for more rule-breaking Celtic music? Full Irish will satisfy your appetite even if it’s just an appetizer for what’s to come.