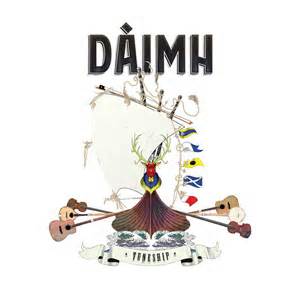 Dàimh hails from the Scottish Highlands, known in Gaelic as A’ Ghàidhealtachd, the Land of the Gaels, and their music is rich in Gaelic tradition. The band features Angus MacKenzie on pipes and whistle, Gabe McVarish on fiddle, Griogair Labhruidh on vocals, pipes, and other instruments, Murdo Cameron on mandola, mandolin, and accordion, and Ross Martin on guitar. Twice nominated for Folk Band of the Year at the Scots Traditional Music Awards, the band plays glorious instrumentals and songs in Gaelic with lyrics about love, drink, war, murder, emigration, dancing, and death. “Daimh are steeped in Gaelic heritage,” says BrightYoungFolk.com in a review of their most recent album, Diversions. “Their beautiful songs and tune sets create an album of shades, mixing the upbeat with the poignant. Diversions is a truly Scottish album musically and in the stories it tells.” The band is known for rich textures, intricate arrangements, complex harmonies, and the seeming effortlessness of their playing. Irish Music Magazine calls them “one of the most exhilarating acoustic bands on the Celtic map.”