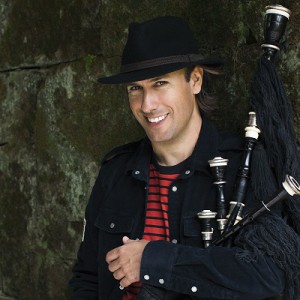 From Galicia, the Celtic region of northwest Spain, Carlos Núñez is widely hailed as the leading player of the gaita (Galician bagpipes) as well as an outstanding performer on the flute and whistle. Coming to international prominence in the 1990’s when he was ‘adopted’ by The Chieftains, his frequent tours and recordings with the Irish supergroup leading to his being dubbed ‘The Seventh Chieftain,’ Núñez has since released ten ‘solo’ CDs that have attained gold and platinum status in Spain, including, most recently, ‘Inter-Celtic.’ Carlos’ stage magnetism and magisterial musicianship have led to raves from the world’s press; ‘Pipe music as if played by Coltrane or Hendrix’ – The Guardian (UK), and ‘If it’s possible to become a pop star playing the bagpipes, Núñez could be the man…” – Los Angeles Times.